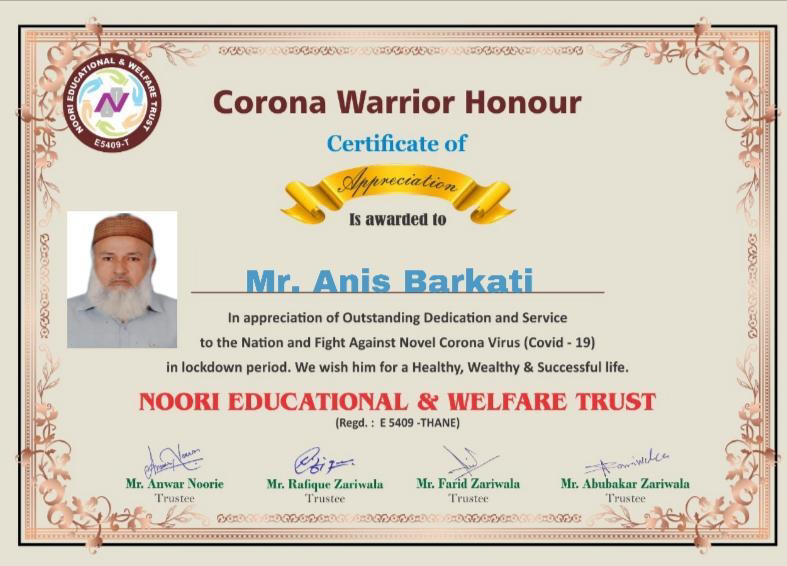 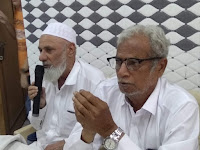 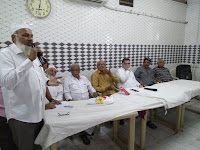 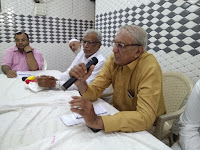 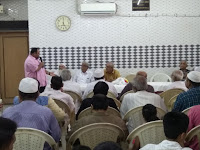 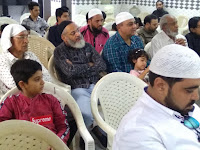 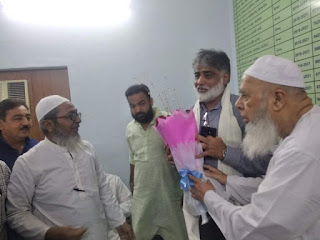 The President of World Memon Organization North India Chapter - Br. Ehsan Haji Amin Gadawala landed on the Soil of Aurangabad, Maharashtra, India where he along with his agile Team received Warm Welcome (Abhinandan) by Aurangabad Halai Memon Jamat Members and especially Motiwala & Naviwala Family which boosted not only his but entire Team's Zeal & Passion to work further. This Hospitality was the embarking point to light the Flame of Humanity on the Social Platform. 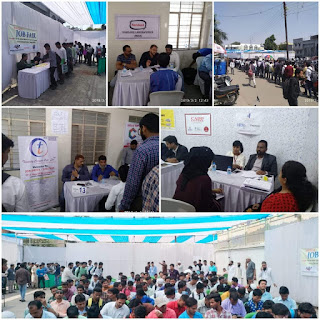 On 2nd March 2019, MEGA JOB FAIR was conducted and it was a remarkable Event for the people of Aurangabad and nearby vicinity. A long Queue containing approx. 1500 candidates were recorded at Motiwala Function Hall. As per AMP's record candidates attended 2500 Interviews and 320 candidates received Employment Letters from 45 Corporate requiting Agencies like Reliance Capital, Infosys, Dainik Bhaskar Group, Eurolife, Credence, CADD Centre, Sri Ram Finance and IT Companies.

This Mega Job Fair invited applicants from all Communities and from all parts of India, It was very well professionally organised by Association of Muslim Professional (AMP), World Memon Organization - India Chapter and Aurangabad Halai Memon Jamat.

AMP's Chapter Head Br. Mohsin Sayed on his interview to Mr. Awesh Bhorgamdawala said, "having seen the enthusiasm of candidates we should re-plan to organise such Job Fair in this locality."

3rd March 2019 was noticed as the 'DREAM-DAY'  for Bachelors and their Parents too. It was a GRAND MATRIMONIAL GET TOGETHER EVENT conducted by Haji Amin Gadawala Foundation Trust by the best support of  Aurangabad Halai Memon Jamat and World Memon Organization NIC. Approximately 1080 candidates were under the same Roof to find and match their wards among them about 110 girls and 181 boys were there. 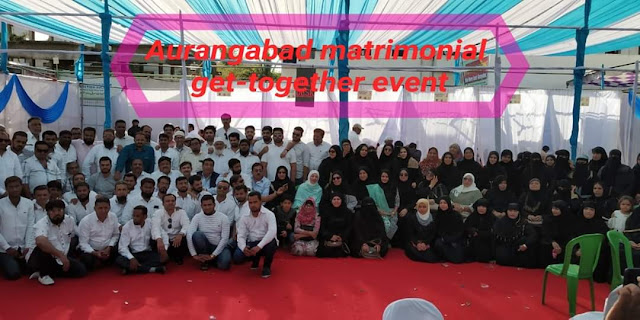 Mrs. Razia Chasmawala and Mrs.Nasima Surty from Mumbai also attended this Matrimonial Event and congratulated Mrs. Maseela Naviwala and  Aurangabad Halai Memon Jamat for the grand success of the Event.

The Events concluded with thanks to each and every members by Mr. Ehsan Gadawala. Community Senior Members Mr. Haji Yunus Motiwala and Mr. Haji Siddique Motiwala gladly blessed Team Gadawala  for these successful Events and future endevours for such beautiful and Noble Jobs for Humanity.
- Report by: Awesh Bhorgamdawala

GADAWALA ORDERS TO INVADE ON AURANGABAD


GADAWALA ORDERS TO INVADE ON AURANGABAD 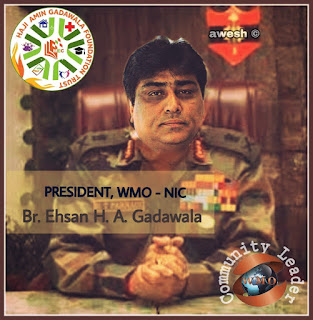 He also ordered not to leave any single candidate with his / her expectation and empty hands. Their Dreams should be turned into Reality. “Let’s together eradicate Unemployment and curb our youths to roam on the Streets” – urged Mr. Gadawala.

Special Transport Services has been arranged from various parts of nearby States. Thousands of candidates and applicants are enthusiastically awaiting for these Grand opportunities.

“There is No Bar for any Cast, Creed and Tribe for this JOB FAIR” – added renowned Social Activist & Treasurer of WMO – NIC Mr. Haseen Aghadi.

Mr. Saleem Bandukia (Exe. Officer) WMO – NIC and Mr. Juned Roghatia (Coordinator) Haji Amin Gadawala Foundation Trust, Mumbai stated that they will leave No Stone unturned to make these Events successful with the help of their expert Team of Volunteers.

MY MEMONS – a social network world wide, extends its best wishes for the Grand Success of these Magnificent Events.

Email ThisBlogThis!Share to TwitterShare to FacebookShare to Pinterest
Labels: Gadawala orders to invade on Aurangabad 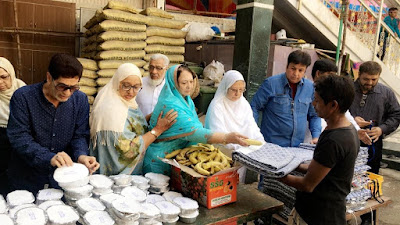 The cognizance of Humanity is vehemently evident by the "HOT Activity in COLD Weather" by the Mumbai based Maseeha Trust headed by Dr. Mariam Shakir Hingora who introspected the Pain & sufferings of needy & underprivileged patients who have been undergoing Medical treatment in various Hospitals and specially in TATA Memorial Hospital Mumbai and along with them their relatives, care takers have been taking shelter in the dormitory at Parel Dargah Masjid.

Senior kind-hearted MEMON Lady who was in Bangalore to spend holidays with her daughter Nishat and children. But on trip she realized that Winter is very Painful to underprivileged outstation Patients in Mumbai and decided to gift them a Warm Blanket wrapped in Care & Love.

Mumbai's eminent  MEMON Social Worker Mr. Aftab Badshah who was conducting there Weekly Cancer Camp, became very happy to see the 'Love of Philanthropy' by Team Maseeha and he also joint to serve patients with Fruits and Food Packets.

May this Noble Work of Humanity be accepted by the Waseela and reference of WALI ALLAH in Parel Dargah and its bounties be accrued in HEREAFTER to all members activily & passively participated. Aameen!

Email ThisBlogThis!Share to TwitterShare to FacebookShare to Pinterest
Labels: Maseeha wraps with Warm Care and Love in Winter - Distribute BLANKETS

Nature’s tyrannical temperament with recent Heavy Rainfall vehemently affects about 12 districts and brought devastating catastrophe in Indian State of Kerala. The Honorable Chief Minister of State Mr. Pinarayi Vijayan stated that, it is the worst Monsoon Disaster since 1924. Other Political leaders also recollected the Havoc in 1924.

The Plight of people has so become measurable those cannot be depicted in words, Mumbai based MEMON Senior Social Activist Dr. Mariam Shakir Hingora, the President of Maseeha Trust directed her agile and hardworking members to reach flood-hit site and provide Relief with all possible means. 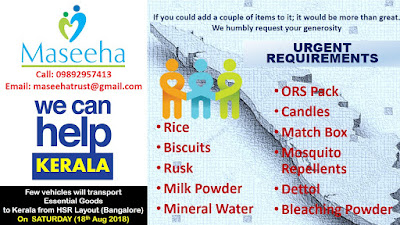 Her active daughter Mrs. Nishat Irfan Sait along with her Maseeha Bangalore Team issued an earnest Appeal to the people through Social Media and various Channels. And within no-time numerous calls & messages were received from all parts of the Country for the Aid, basic commodities and Money for victims. Many collection centers were setup and vehicles were on the road to transport relief to the Flood Zone.

Email ThisBlogThis!Share to TwitterShare to FacebookShare to Pinterest
Labels: MEMON rushes to Kerala

GADAWALA ORDERS TO INVADE ON AURANGABAD